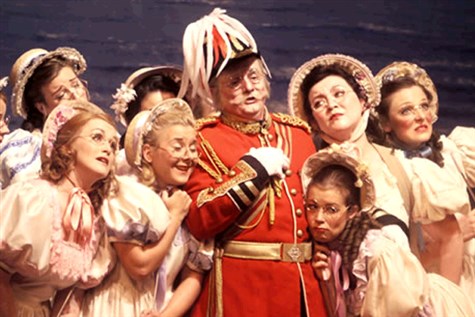 The Pirates of Penzance is one of the most enduringly popular of Gilbert and Sullivan’s great comic creations full of memorable melodies you will be humming all the way home.

Jam-packed with sentimental, swashbuckling pirates who are really peers of the realm, a completely dotty Major General and a bumbling bunch of hopeless but hilarious policemen, what could possibly go wrong?

Frederic, a pirate’s apprentice, falls instantly in love with Mabel, the daughter of Major-General Stanley. Frederic is due to be released from his apprenticeship on his 21st birthday, but there’s a problem. Born on 29 February, he discovers that technically he must serve the pirates for another 63 years! Although very much in love, his dedication to duty is resolute. Can he and Mabel find a happy ever after?

Be prepared for a delightfully entertaining and traditional production of this much-loved comic opera directed by, and starring Richard Gauntlett.